We know that state provision of services is generally inefficient and unresponsive to customers' needs compared to the private sector. So if a service can reasonably be provided by the private sector, then it should be. This is why buses were deregulated in the 1980s and it was a disaster. 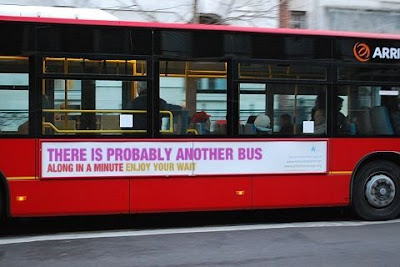 Unlike, say, water or rail, there was no regulation of fares and these went through the roof, and are still rising year on year above inflation. Instead of profitable routes cross-subsidising unprofitable routes, extra public money had to be found to subsidise these routes. A very few routes enjoy competition, high frequencies and occasional discount fares. But the majority of profitable routes are not worth fighting over, and the customer is treated as a captive cash cow.
So why this discrepancy between theory and practise? Free markets are competitive, but attempts to introduce them so often seem to bring uncompetitive rip-off practises instead. We (rightly) aren't willing to stand the withdrawal of the only mobility option from millions of vulnerable people, so we try markets plus subsidies, which inevitably corrupts the markets. And for this, the publicly owned asset - the right to run buses on profitable routes - was given away for nothing.
Today government wants more people to take the bus instead of driving, and PTEs up and down the country will spend money on better bus stops and better bus lanes, and more subsidies. And up and down the country bus companies say "thanks very much, and by the way we're putting up the fares again, and cutting services", and there isn't a sausage that can be done about this but to offer even more subsidies.
Yes, my local service, the 86 is facing the axe. The government closed our post office earlier this year, many pensioners expected to walk miles uphill to another, or to catch the, er, bus. An angry local has postered the bus stop calling this cut barbaric, quite rightly. So we have a campaign of leaflets, petitions, complaints to the council, the PTE, the MP. The PTE write back offering an hourly daytime-only service, which is pretty miserable. When you can never entirely trust a bus to turn up at all, an hourly service is hardly worth using - with a 15 minute service such unreliability is not such a big deal.
The government has flirted a little with largely unusable powers for PTEs to take on regulation of fares and timetables, so there is some recognition of the problem, but clearly no determination to bring it to a resolution. It's another Labour failure and we know the Tories - the original culprits - will do nothing. And both will probably blame the Lib Dem council. This is a vital issue for millions of people, and for the environment, that we should be taking a strong lead on.
And all parties should learn the lesson that involving the private sector, and giving away public assets to the private sector, is not the same thing as introducting competition and markets; it doesn't bring any of the benefits, and if we're not careful we end up paying way over the odds for inferior services.
Posted by Joe Otten at 8:51 pm 1 comment:

AV would be brilliant

Not so brilliant for the Lib Dems, but good for democracy. Not as good as STV of course, but let's face it, what is?
First Past the Post is the cornerstone of the brokenness of our politics. It has the power to subvert all your campaigning efforts for a good cause, making that cause weaker instead of stronger.
Support the environment? Vote Green where the Lib Dems could win and you do more harm than good.
Support Euro-nihilism? Vote UKIP where the Conservatives could win and you have the opposite effect.
Support socialism? Vote Socialist Labour, where Labour could win, and, well maybe the pattern breaks down there.
Want to stand as an independent? The problem is that whichever party it is you consider least bad, you will take more votes from them than from the others. So unless you can be very confident of winning, you will only make things worse.
AV fixes all this. It lets you stand and campaign for what you believe in without damaging the causes you support. It lets you vote for what you believe in without having to second guess what the result will be and support the lesser evil.
Sure, it's not proportional. That stinks. But proportionality is not the only important feature of an electoral system. If it were we would support list systems rather than STV. And this is the worst time of all to hold a referendum on a proportional system, when the BNP have just won seats.
If Brown and his few friends plump for AV, we will probably get it. We could even have it for the next general election - it is the only reform that won't require years of boundary commission work. And it may be a stepping stone to STV or AV+, but not towards party lists.
If they plump for PR, the whole thing will be quietly dropped, "after considered reflection", the next time Griffin gets some publicity. Or, even worse, we have a referendum on it after weeks of the Tory press giving publicity to the BNP at every opportunity in order to get a "no" vote. It would then be off the agenda for decades. This is the single worst time for a referendum on PR. Give it a few years when a couple more nazi MEPs won't have brought the world to an end.
See also: Anthony Hook, Mark Reckons, Himmelgarten Cafe, Jock Coats, Sunder Katwala, and Duncan Borrowman (already linked)
Posted by Joe Otten at 10:44 am 7 comments:

What you should have voted to keep the BNP out

Hindsight is a wonderful thing, but too many people have been stupidly talking up the BNPs chances to the point of self-fullfilling prophecy - often in a genuine attempt to keep them out, but sometimes to frighten their own disillusioned supporters into turning out. The one thing the BNP had none of the resources to do - a get the vote out operation - was done for them by their opponents.
But what I want to do here is look at who, with the benefit of hindsight, the anti-BNP voter should have voted for. Mostly to shame everybody else who claimed it could only be them.
So in Yorkshire, that is Labour, who could have beaten the BNP to the last seat with an extra 10270 votes. The Greens would have needed 15684, UKIP 26528 and others more.
In the North West, UKIP would have needed only 2448 more votes to beat the BNP, the Greens 4961 more, the Lib Dems 28549 votes, and others more.
In regions where the BNP failed we can see who took the last seat, and see how many votes ahead of the BNP they were.
In East Midlands, this is the Lib Dems 45109 votes to the good of the BNP.
In East of England, this is UKIP, second seat 59947 votes ahead of the BNP.
In London, the Conservatives are 73259 ahead of the BNP with their 3rd seat.
In the North East, the Lib Dems are 50944 ahead of the BNP.
In Scotland, Labour (2nd seat) are 87779.5 ahead of the BNP.
In the South East, the Lib Dems (2nd seat) are 63401 ahead of the BNP.
In the South West, the Conservatives (3rd seat) are 95358 ahead of the BNP.
In Wales, UKIP are 50471 ahead of the BNP.
In the West Midlands, UKIP (2nd seat) are 28268 ahead of the BNP.
What can we learn from this? Mostly that it is guesswork, and you are best off just voting for whoever you actually support. But perhaps these things can be predicted. To vote otherwise just because somebody is only 50,000 ahead of the BNP seems unreasonable. But could the results in Yorkshire and the North West have been predicted and prevented? Not without vastly more accurate polling, region by region, than we had. Who would pay for such polling, and would we trust it? Based on the polling we had, my calculations suggested that the Lib Dems, Labour or the Tories would be the best bet to beat the BNP in the North West, not, as it turned out, UKIP and the Greens.
And the best tactical voting strategy in the world wouldn't compensate for another 0.5% vote going to the fascists.
So maybe instead our non-fascist political class just needs to get out on the streets and argue its corner a bit more. To make a case for liberty, tolerance and human rights. To think twice about adding more layers of distance, obfuscation and technocracy between the people and their public services. Not just to tell people that they don't have to be evil to have a voice and a stake in society, but to make sure that it's true. And when people choose to be evil anyway, to oppose and defy them at every turn.
Posted by Joe Otten at 2:27 am 3 comments:

Email ThisBlogThis!Share to TwitterShare to FacebookShare to Pinterest
Labels: elections

Anders Hanson picks up a story in the Times covering some blogging covering the various parties positions on science related policy questions, and generally bemoaning the Greens' medieval denialist attitude to any science that doesn't support their agenda.
Anders quotes Green MSP Patrick Harvey, and it is worth repeating

I recognise that the Green movement has taken some time to develop from a single issue group, and perhaps in some areas we’ve some way to go yet… The best way of supporting our continued development is to subject us to parliamentary scrutiny, so that our policies can be tested alongside the rest.

I am an active member of the Green Party, but this policy is frankly moronic. It is not a manifesto commitment, so MEPs elected this year will not be pushing for it. Please consider what Greens parties are going to prioritise rather than some out dated policy the party hasn’t got round to changing.

Oh dear. Make some allowances please, for a movement in its infancy. Except that it isn't. Founded in 1973, with policies of nuclear deterrence, anti-immigration, women should stay at home, etc, etc, it has clearly been a long road to here.
Let's put that aside. Let's regard the Green Party as beginning with that big 15% vote share they got in the European elections of 1989. By then they had more or less the policies they have today. Perhaps they would support some roadbuilding, but not very much. That's 20 years ago. Since then there will have been 40 party conferences, and therefore probably around 80 to 100 major policy papers agreed.
Now the body of "outdated" policy that Ramsey refers to is called the Manifesto for a Sustainable Society and can be found here. This is where those 80 to 100 policy papers will have ended up. How many sections does it have? 37. So each of them has been updated on average 2 to 3 times since the party's coming of age in 1989.
Riiight. And you've still got some way to go. OK. What could possibly be the problem?
Well, I suggest that the problem is a great deal of incoherence at the heart of Green Party thinking. The core value, that economic activity is the cause of all our ills, is not reconciled with the desire for increased public spending on everything. The demand for social justice is not reconciled with their opposition to the economic and technological innovations that have freed or will free millions from serfdom and servitude. Their demand for a whole different kind of economic system is not tempered by any kind of detail on what that system would look like - not least because they can't agree.
Denialism on science, denialism on the benefits of free trade, wishful thinking on energy; they may not understand what is wrong with the world, but at least they have their comfort zones.
Posted by Joe Otten at 6:08 pm 12 comments: