This is from the text of the Conservative leaflet that came through the door of my home in Sheffield today:

Conservatives have launched a Transport Commission for the North of England to find out the transport priorities for South Yorkshire. The Commission was launched by William Hague and will examine how to improve all forms of transport including rail services. Conservatives have announced plans for high-speed rail links between Yorkshire and London taking just over an hour and a half.

What's wrong with this picture?

1. The proposed high speed rail runs from London to Leeds via Manchester, bypassing Sheffield completely. They should not for shame breathe a word of it round here.

2. This will be paid for by cutting to the bone maintenance and upgrades on the rest of the rail network, so we will see a degradation of our rail services.

3. The Midland Main line from Sheffield to London can run trains in 2 hours - the Master Cutler does this. But usually the trains stop everywhere, adding half an hour. Not great, but still not too bad. With upgrading and fewer stops this could be improved further. 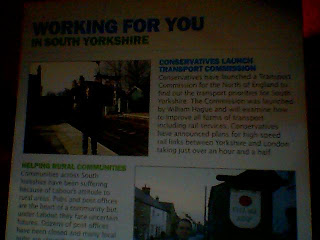 The Conservatives have adopted a policy which is bad for Sheffield, and for most of the country, and shown no understanding of our transport situation - the real weaknesses are rail to Leeds and road and rail to Manchester. Trains to Manchester were quicker in the 1920s than they are now.

So they paste South Yorkshire into the text of a policy for Leeds, and hope nobody notices. This comes under the headline Working for you in South Yorkshire. No kidding. I dread to think what will happen when they start working against us, like Tories usually do.
Posted by Joe Otten at 9:00 pm No comments:

David Cameron was on radio 4 this morning, demanding a General Election, to sweep out the old, corrupt House of Commons and bring about a fresh start and a new dawn.

What is wrong with this picture? Of course opposition leaders must call for a general election, every day during the lame duck 5th year of a parliament. That's textbook. Of course they must use any issue that comes up to justify this call. That's obvious.

But this particular call is shabby and shameful. Firstly, it tries to identify in the public mind a cross-party scandal with the government. Yet his party is just as guilty. (As is UKIP.)

Second, do we really think the Telegraph is finished with us? Let the bright light of scrutiny shine on every corner of this issue before we jump to conclusions regarding how to deal with it, and who to elect or re-elect.

Third, let's give the parties time to deselect their wrongdoers. It would be absurd to hold an election so quickly that major culprits go unexposed or undeselected, and get to serve (themselves) a whole extra parliament.

There is a public mood that politicians are "all the same", based on a handful of serious concrete cases. Over time, we can but hope a distinction will be drawn between the guilty and the innocent, whatever party each is found in. Is that what Cameron wants to pre-empt?
Posted by Joe Otten at 3:22 pm 1 comment:

Put the boot in harder, and aim better

It is difficult to put the boot in, to demand prosecution of expenses fraudsters, when you are in a grey area vulnerable position yourself, and the whole house is being condemned for the normal use of expenses, as if that were the same kind of thing as fraud. It is bothering me now that the frauds - of whom there have been a handful - are getting lumped together with those who are merely making use of the allowances they have been given as part of their job.

However I am not in a grey place so I can spell it out.

However claiming for a mortgage you have already paid off is fraud. An MP couple claiming 2nd home allowance on both their homes is fraud. "Flipping" to maximise allowance spend is fraud. Telling the tax office something different to the fees office is fraud.

These MPs should be expelled from their parties, deselected, and prosecuted, in no particular order. So far Labour have "suspended" two, and the Tories merely kicked one off the front bench. Luckily no frauds in the Lib Dems, so far.

The rest of them are not frauds. But giving yourself an allowance system more generous than it ought to be is corrupt. So judge them not by what they claim, but whether they voted to reform it or not. Whether they voted for transparency - or for the exemption to the Freedom of Information Act. Large numbers have voted both ways on this, but even those who voted the wrong way, may honestly think the package is not too generous.

People of similar seniority in the private sector are on 6 or 7 figure salaries, with bonuses and expense accounts that will make your eyes water. MPs could vote through the same for themselves, but they don't. Because it would be corrupt.

So this is what I want to see from the party leaders. Rather than being caught between trying to defend what is reasonable and condemn what is wrong, let's throw the handful of fraudsters to the lions, condemn the system, and condemn those who have voted to keep it secret and unreformed. And three cheers to the Telegraph, and the Freedom of Information Act for making reform possible. And shame on Cameron and Brown for ignoring the big money spinner of property speculation on the back of subsidised mortgages.
Posted by Joe Otten at 2:15 pm 4 comments:

Labour: where can it go from here?

Labourology seems to be the rule at the moment. This excellent piece by Alex Wilcock is particularly pointed. "They won’t listen to your complaints. They won’t listen to your concerns. Now they’re telling you to clear off if you don’t agree with everything they ever do." Their sense of frustration is palpable. 12 years of Labour! Surely everything should be all right by now?
Speaking to Labour activists on occasion, what is most remarkable is this disconnect between what they percieve the Labour Party as being about, and what the government does. However much some of them disagree with the government, the Labour Party still has some hidden magical essence that is different. Total cobblers of course. The best way to judge the party is by what it does in government. That is what defines it. The rest is comfort food.
The 50p rate signals the end of the Blair project, which was to get the party to shut up about what it believed in, because that was largely wrong, and adopt a centrist position, or conservative or neo-con as necessary, to be elected and achieve the core agenda of pushing through big public spending, much of which has done some good, albeit inefficiently.
The problem with this was not where the party was moving away from, but where it was moving to. Labour instincts of opposing the bosses and capitalists at every turn had to be suppressed, but there was no real debate of these new centrist/neo-con values. Loyalty matters more than debate anyway. So now the project is ending the unresolved conflict re-emerges: between the moral superiority of socialism and the practical necessity of rejecting socialism. This is a dead debate, but I don't think the Labour Party knows how to have any other. It knows no other values by which it might criticise the rights and wrongs of a policy, but socialist values, and it knows it cannot trust itself to speak these values.
So when a party/government has a culture of a) no debate, or b) if there must be debate, a futile left-right one, it should be no surprise that it cannot listen, that it must become out of touch. Just as the Tories ignored all the sane advice on the mess they were making of railway privatisation, Labour cannot understand the mess of the tax credits system. Political good intentions trump any constructive criticism. And if a policy is wrong because it is illiberal, the same applies. They have put their values away because they are left wing and so can't be trusted.
And this value-free, debate-free politics leads naturally to the cult of managerialism. We know how to run public services, they said. But they didn't. Chris Dillow's book The End of Politics is good on this, where I have dipped into it.
So we have an autocratic value-free government/party incapable of listening, and that is enough - any such party would have to go badly wrong sooner or later. But that's only half the problem. They've also run out of money. In 1999 Gordon Brown was crowing about how he'd fixed the structural budget deficit that the Tories had left. But even before the financial crisis, the golden rule had gone and prudence was dead. Having no money means that New Labour deal - switch off your values and we will give you big public spending - can no longer work. So the party will descend into infighting as both sides renege.
12 years. Where did it all go wrong? The New Labour deal - you can't have socialism, but you can have a bigger state - could only last so long. The working class may have been abandoned, but I don't think the class struggle mentality, or the Hegelian dialectic was. So centrist/neo-con Labour needed enemies and scapegoats as much as Old Labour did. But I suggest most of the problems our society faces are organic, spontaneous, not the result of a clash of interests, and so top-down confrontational answers do not work.
Even a party starting from a good place, which made a virtue of loyalty over debate, would inevitably go wrong over time. Add to that a belief in top-down micromanagement from a position of ignorance; an internal compromise that demands ever-ballooning state spending; adherence to some of the philosophical errors underpinning socialism, if not socialism itself; preference for a value-free attitude to business, rather than admitting your values were wrong; having no regard for liberalism; willingess to go to war on a lie;... etc, etc.
Frankly, it is amazing that things are not already much much worse than they are. Where should Labour go? What should it change? Or is the question: what on earth should it keep the same?
Posted by Joe Otten at 10:45 am No comments: