Conservatives U turn on decentralisation

The Tories are calling for a centrally-imposed freeze in council tax, as part of their commitment to localism.
I thought I might refer to their previous announcement on the subject of localism, and found that the page had been removed. 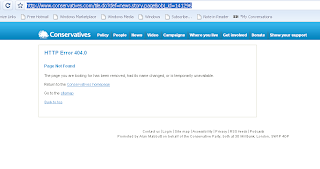 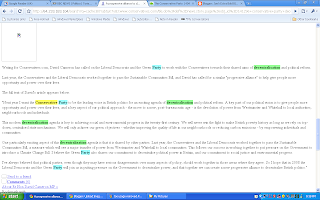 All fine-sounding stuff of the type tories say when they are behind in the polls.
And google gives us the date:

That's 8 days ago. This page seems to have been "lost" suspiciously close to the date of the announcement of this new policy.
The old Dave said:

So I hope that in 2008 the Liberal Democrats and the Green Party will join us in putting pressure on the Government to decentralise power, and that together we can create a new progressive alliance to decentralise British politics.

Actually, it's a disturbingly common phenomenon. The Conservative website must have one of the worst archiving protocols going.

I suspect that it is the result - as you imply - of deliberate redacting of the past.